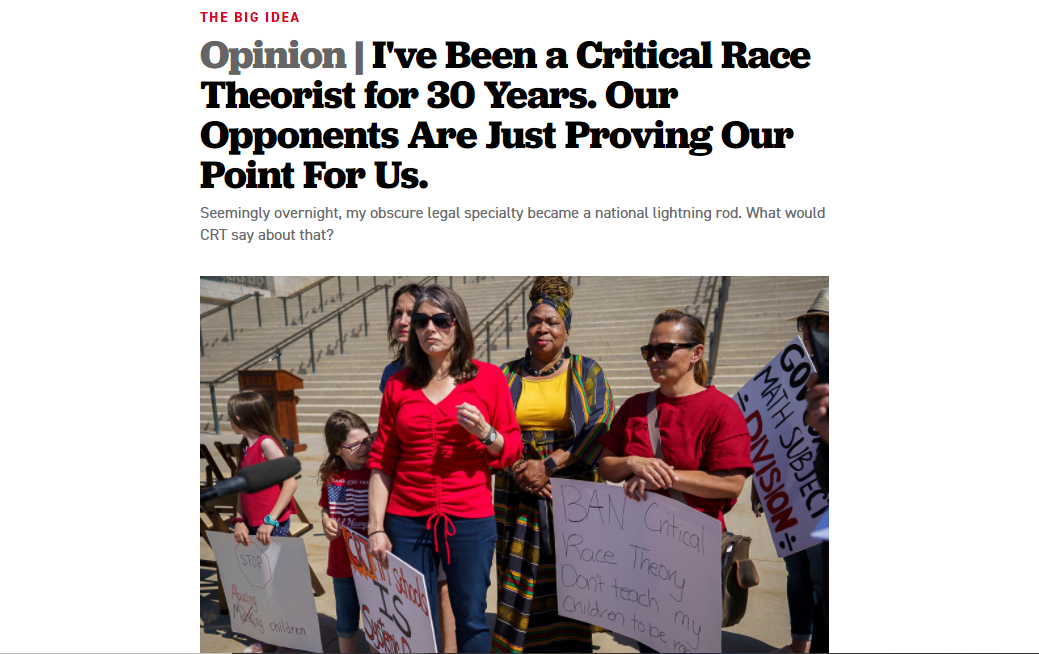 ARTICLE: I’ve Been a Critical Race Theorist for 30 Years. Our Opponents Are Just Proving Our Point For Us

By Gary Peller | Politico
Published in June of 2021

KEY QUOTE: “The point of those who seek to ban what they call “CRT” is not to contest our vision of racial justice, or to debate our social critique. It is instead to tap into a dependable reservoir of racial anxiety among whites. This is a political strategy that has worked for as long as any of us can remember, and CRT simply serves as the convenient face of the campaign today—a soft target.”

DID YOU KNOW? We have curated numerous articles on racism and critical race theory.

Read the full article at Politico

ARTICLE: How the Church Can Use Critical Race Theory

In easy to understand, straight forward language Relevant’s Tyler Huckabee details the incarnation of the war against critical race theory, the varying definitions and key tenets of CRT, and how Christians should respond.

END_OF_DOCUMENT_TOKEN_TO_BE_REPLACED

Although the anti-critical race theory rhetoric didn’t really begin in earnest until 2020 (hint: an election year), the groundwork was being laid back in 2018 by evangelicals on blogs, speeches, and sermons. Reporter Andre E. Johnson traces the roots and motivation of white evangelicalism becoming obsessed with opposing CRT.

END_OF_DOCUMENT_TOKEN_TO_BE_REPLACED

ARTICLE: What is Critical Race Theory?

In clear and concise prose with plenty of opportunity to dig deeper the editors of Faithfully Magazine list the core concepts and roots of critical race theory in addition to the inception of and current iteration of the backlash against critical race theory. An excellent starting point to learning about CRT.