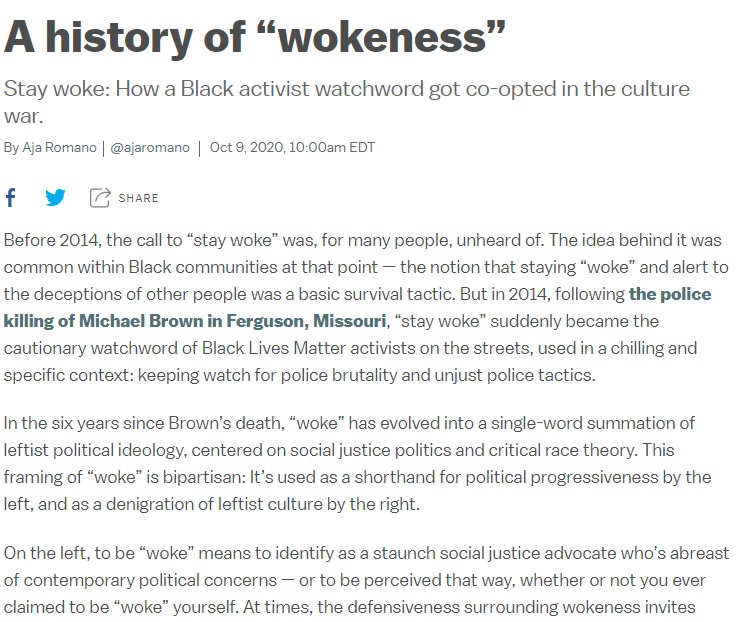 ARTICLE: A history of wokeness

By Aja Romano | Vox
Published in October of 2020

SUMMARY: An excellent deep dive replete with songs, video, and tweets that traces the origin of woke, its multiple definitions, and how it is being used in our current cultural moment.

KEY QUOTE: “On the left, to be ‘woke’ means to identify as a staunch social justice advocate who’s abreast of contemporary political concerns — or to be perceived that way, whether or not you ever claimed to be “woke” yourself…On the right, ‘woke’ — like its cousin ‘canceled’ — bespeaks ‘political correctness’ gone awry, and the term itself is usually used sarcastically…But as use of the word spreads, what people actually mean by ‘woke’ seems less clear than ever.”

SHOW: What Does ‘Woke’ Actually Mean?

Just six minutes and two videos is all it takes to quickly learn about the origins of the word woke, its many definitions, and why we should ask people what they mean when they use the term before engaging in a conversation.

Two notable tweet threads from author Dr. Esau McCaulley and Love Thy Neighborhood founder Jesse Eubanks on why we need to be need to be thoughtful with the words we use and not parrot partisan lexicon.

A call to Christians to think about the words we use and to stop using the word “woke” as a pejorative.