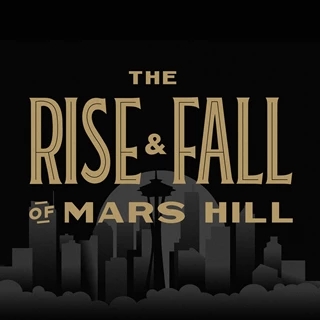 PODCAST: The Rise and Fall of Mars Hill

SUMMARY: From Hillsong’s Carl Lentz to Liberty’s Jerry Falwell Jr., including local scandals most of us never hear about, there has been no shortage of pastors, churches, and organizations that have been exposed using power and influence to cover up sexual misconduct, toxic work environments, and other assorted sins. In interviews with former Mars Hill church members, ex-evangelicals, pastors, journalists, authors, and all of those in between The Rise and Fall of Mars Hill tells the story of a church culture that drifted from being a church about Jesus to a church about the pastor.

For 18 years, Mark Driscoll led Mars Hill church in Seattle, Washington where average attendance topped 12,000 and sermons garnered over 250,000 weekly online views. Eventually the church’s reach expanded to fifteen sites in four states. But in 2014, Driscoll resigned, following an investigation by church elders that found “bullying” and “patterns of persistent sinful behavior.” After Driscoll’s resignation, most of the Mars Hill churches disbanded.

Creator and narrator Mike Cosper does a superb job of telling the story with grace and truth. Cosper clearly doesn’t want to tell the story to shame, but to point out some of the warning signs in hopes of preventing another Mars Hill situation.

What makes The Rise and Fall of Mars Hill standout from other Christian podcasts is its excellent music and tight production while telling a longform story. It is on par with NPR podcasts.

KEY QUOTE: “I think the worst thing that could happen with a show like this is that people look at it and go, ‘Well, I’d never fall for that.’ Try this on for size, this idea – You would do the exact same thing and you are capable of all those things you hear other people say. If you take that mindset into it, then you will protect yourself and the ones you love. If you listen to this and it is like a freak show and go, ‘That would never happen to me. I would never do that.’ You will learn nothing and you will end up doing the exact same stuff.” – Jesse Bryan

BONUS: If you want to know what the podcast is all about before diving in, we recommend listening to Skye Jethani‘s interview with creator Mike Cosper. Start at 37:47 to get to the interview.

DID YOU KNOW? Sunday to Saturday has curated topical playlists on Listen Notes where you can subscribe and listen to the curated episodes in your favorite podcast player.

BOOK: The Color of Compromise

To this day church services across the nation are some of the most segregated times of the week. Is this by random chance or was this intentional? Author Jemar Tisby details the sordid history of the American church and its complicity with racism in the New York Times, USA Today, and Wall Street Journal bestseller The Color of Compromise.

END_OF_DOCUMENT_TOKEN_TO_BE_REPLACED

The color of one’s skin is a driving force in how one experiences the world. A brown person’s experience is distinctly different from that of a white person. With this lens professor Robert Chao Romero tells the history of the exploitation of his people on multiple continents while incorporating the birth of the brown church.

END_OF_DOCUMENT_TOKEN_TO_BE_REPLACED

SHOW: The Color of Compromise

Author Jemar Tisby traces the intertwining of race, the church and politics from the 1400’s into the 21st century in his 12-part study series with episodes ranging from 5 to 26 minutes. Tisby clearly shows how racism has been woven into the fabric of American life with the church’s explicit and implicit support.