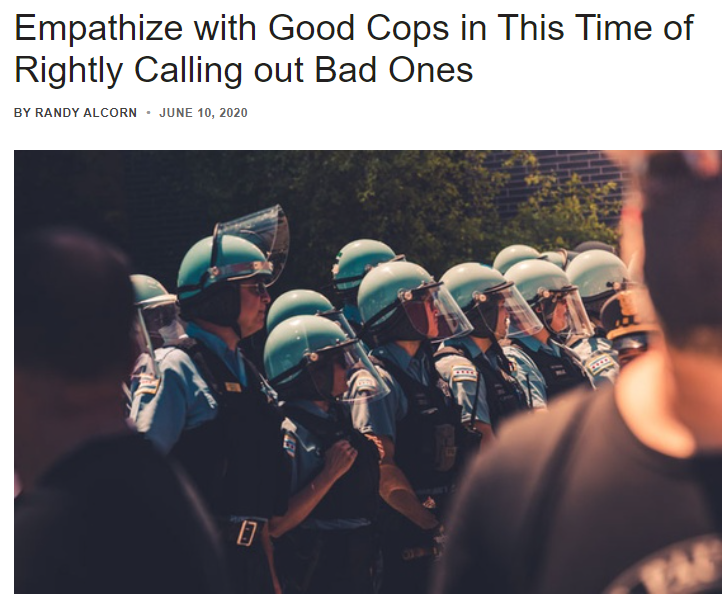 ARTICLE: Empathize with Good Cops in This Time of Rightly Calling out Bad Ones

By Randy Alcorn | Eternal Perspective Ministries
Published in June of 2020

SUMMARY: Taking a nuanced view leads to tension and oftentimes that tension is where we Christians need to be. Author Randy Alcorn says that, “just as bad cops deserve to be condemned and prosecuted, good cops deserve to be praised and commended.” We couldn’t agree more.

KEY QUOTE: “As true racism by a cop can result in disaster, false assumptions about the majority of cops can also be devastating, giving people a warped lens through which they view the police.”

Read the full article at EPM.org

ARTICLE: What is Policing and How Do We Reform It?

Although on the long side this article has it all. It is a fantastic starting point to learn about policing history, what police reforms to advocate for along with a personal story that ties it all together. Ultimately it is up to us citizens to decide whether we want a police force that “enforce(s) every law on the books by identifying and punishing any infraction” or one that “help(s) to maintain community standards of public safety and order.”

END_OF_DOCUMENT_TOKEN_TO_BE_REPLACED

ARTICLE: When Will America Take What We Know About Racist Policing Seriously?

From the report issued by President Harry Truman in 1947 to the Kerner Commission ordered by President Lyndon Johnson in 1968 Americans have known for decades that racism has been embedded in police departments across the 50 states. Police brutality along with a culture of racial bias has put us in the current situation in the 2020’s. Relevant Magazine’s Tyler Huckabee says enough is enough. We don’t need anymore commissions or studies, what we need is meaningful police reform.

END_OF_DOCUMENT_TOKEN_TO_BE_REPLACED

ARTICLE: How Can We Enhance Police Accountability in the United States?

Every forty hours a Black man is killed in America by police. The seemingly endless onslaught of violence against Black bodies makes it readily apparent that there must be changes to the policing culture. Author Rashawn Ray says there are two reforms we should make to change police accountability. One, officers fired for police misconduct should not be allowed to work in law enforcement again and two, we should restructure civilian payouts by moving them from taxpayer money to police department insurance policies.