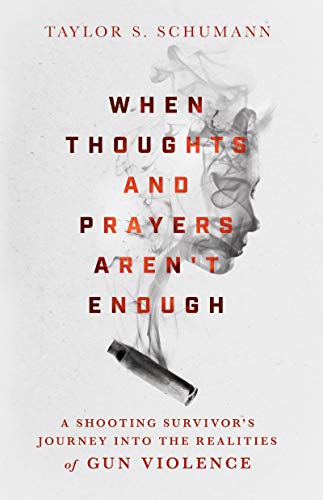 SUMMARY: For many Americans, statistics on the number of gun deaths in the country doesn’t phase them. For instance, did you know that every day in the United States, 316 people are shot? Did you know that 106 of the people that are shot die (5 of them being children from 1-17 years old)? Did you know that sixty percent of gun deaths are suicides and another third are homicides? Are we willing to accept these statistics as normal? What will it take for us to unite and pass common sense gun laws?

“Before it happened to me, it was easy to see shootings in the news, feel sad, offer my thoughts and prayers, maybe add one of those little ribbons to my Facebook profile picture and then move on with my day,” author and shooting survivor Taylor Schumann writes. “I didn’t have to stare at the suffering. I didn’t have to think about it if I didn’t want to. It wasn’t my problem.”

In When Thoughts and Prayers Aren’t Enough Schumann graciously invites readers into her personal and private thoughts during and after a shooting that destroyed her right hand and required numerous surgeries, leaving her with 20% use of her hand along with chronic pain. Her vulnerable writing doesn’t hide the anger, confusion, frustration, pain, and trauma she still deals with. She becomes addicted to pain medication, struggles with survivor’s guilt, and battles depression. Her entire world is upended by being shot and she is one of the “lucky” ones that survived a gun incident. And that is where Schumann writes about one of her first revelations.

“I could feel two very different things at once,” Schumann says. “I could be grateful I survived and angry that it happened. I could be happy for my friends who were getting to do all the things I wanted to do, and at the same time I could recognize what I had lost.”

And that duality, that uncomfortable juxtaposition, extends into striving to bring a little bit of Heaven to Earth. “As believers, we can believe in both things. We can believe there is evil in this world and Satan is constantly attempting to kill, steal, and destroy. We can also believe in the power of lows and action as a form of loving and serving our neighbors.”

This revelation is just one of many that Schumann articulates well. Her unique insight into empathy for people addicted to pain medication (pg. 28), platitudes that people say to others who have experienced trauma (pg. 85), and attempting to answer what justice looks like (pg. 67) are just a few worth mentioning. But perhaps her pithiest insight comes after the mass shooting in June of 2016 when 49 people were killed and another 59 were injured at a nightclub in Orlando.

“I fully expected the pastor to bring up the shooting and offer corporate prayers for those affected. I expected other worshipers to be talking about it, to be mourning together. Certainly, I thought, we are going to acknowledge the hurting and suffering of that community. Certainly the pastor will notice me in the congregation, see the connection, and realize this is important. I waited throughout the whole service and not one word was uttered about it. No acknowledgment, no prayer, nothing.”

That day in church served as an impetus for Schumann to dedicate her life to gun reform. While effectively emotionally raw in the first half of the book, Schumann skillfully pivots to a trustworthy gun reform expert in the second half. Speaking with the authority of a gun survivor and someone who has obviously done an abundance of research, Schumann discusses domestic violence, family fire, firearm suicide, and school and mass shootings in relation to gun violence.  In each topic, she starts with a brief story and some notable statistics before discussing solutions such as safe storage laws, closing loopholes in current guns laws, and universal background checks.

“If we want to gain a full picture of what gun violence is doing to our country, we have to do our best to examine every aspect and every ripple,” Schumann says. “The numbers are where it starts but far from where it ends.”

Schumann’s clear, concise writing extends into chapter 13 where she addresses common arguments about gun reform. In the final two chapters, she gives guidance on how to talk about gun reform and a prophetic call for the church to lead the way with compassion and common sense gun laws. It is a call for those in the church to recognize the pain of the victims of gun violence and to value the life of humans over an amendment or a weapon.

“I want other survivors to know that they are seen and known by God and therefore seen and known by us too,” Schumann says. “I want them to feel supported and held and cared for by us because we are the hands and feet of Jesus on earth. I want to put an end to the days of feeling invisible and forgotten and ignored because our guns are more valued in our country than lives.”

Ultimately, it is a call for hope.

“I want to end gun violence. I want no one else to have to suffer as a result of this horrific crisis. But what I want even more than that, is for Christians to take up their place in this fight. I want them to finally open their eyes to this injustice all around them, and to show the world we are here and we care and we will work to protect each other.

“I want us to stop enabling violence and instead seek peace, even if it costs us something. We have the ability to bring the kingdom of God to this earth with our hands and our feet. If the goal of being a follower of Jesus is to be more like him and to invite other people into his kingdom, then this would be a great place to start.”

KEY QUOTE: “I am thankful to be an American. I recognize the privileges given to me as a citizen of this country from birth, and I’m incredibly grateful for the opportunities afforded to me simply because I was born here. But what I care about more than anything, what I am grateful for more than anything, what I love more than anything is Jesus. We have been given rights in this country that people in other countries do not have. We should be thankful for that. But if those rights don’t serve everyone, if they are misguided, if they are harmful, why do we continue to elevate them as gospel truth? Why have we become so devoted to the twenty-seven words of the Second Amendment that we can close our eyes to the suffering they have inflicted and the lives they’ve stolen? If you are a follower of Jesus, your inheritance is in Christ. The kingdom of heaven is our home. We are coheirs with Christ in the kingdom of God! That is what the Word of God –the divinely inspired Word of God–tells us. That’s what we believe. It is more important than anything on this earth.”

BONUS: If you want to learn more, listen to Schumann discuss her book on the Faith, Philosophy & Politics podcast. Host Scott Coley asks poignant questions and does a great job of giving a complete overview of the book with key highlights.

BONUS II: The first chapter is available for free on IVPpress.com. Also be sure to checkout the excellent 15-page FAQ on gun reform.

DID YOU KNOW? Sunday to Saturday has a GoodReads page where we post all of the books we have read – even the ones that didn’t make the cut.

BOOK: God and Guns in America

Few Christian books can integrate and appeal to Scripture without sounding preachy, pretentious, or perfunctory. Even more so when an author takes on a polarizing subject such as guns. And yet this is what Michael W. Austin’s God and Guns in America excels at. Biblically rooted as well as logically sound, Austin’s approachable writing style…

BOOK: Whom Shall I Fear?

As humans, most of the time we want complex issues to be solved easily. For instance, if individuals with guns are targeting churches, then members of churches should carry guns to counteract the threat. While on the surface that may seem like the logical thing to do, and certainly a good portion of Americans would…