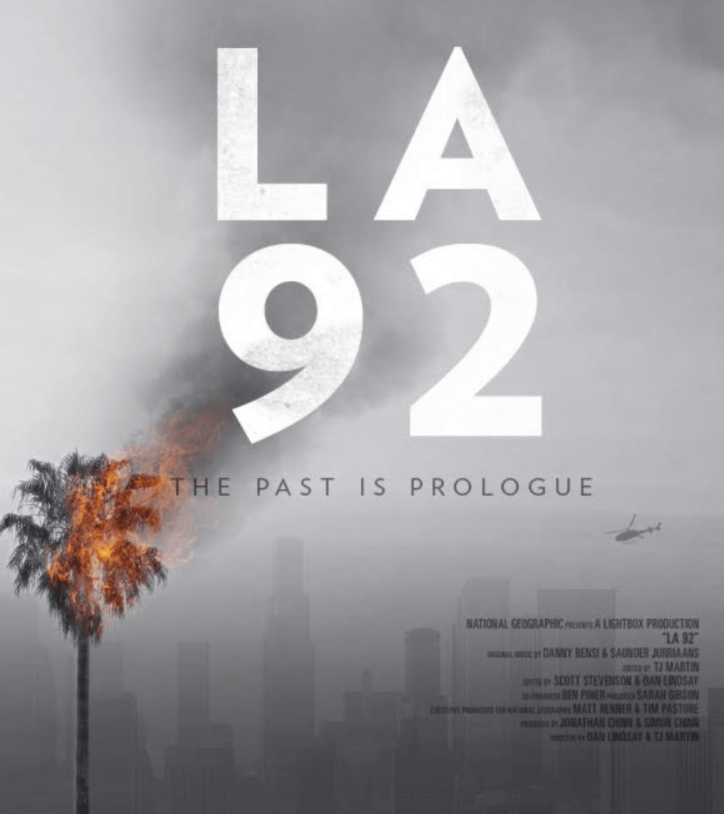 SUMMARY: At first glance LA 92 is a history lesson about the Los Angeles violence in 1992 following the Rodney King verdict, but just below the surface is a warning and a call for Americans to wake up. For hundreds of years Black people and people of color have complained about police brutality and, unfortunately, most of the time white people have ignored or dismissed the calls for help or justice. This indifference and callousness combined with other issues such as high unemployment, underfunded schools, and aggressive policing tactics has led to frustration which manifests itself in violence.

The filmmakers expertly use archival footage from television stations and amateurs from 1965 and 1992 to tell the story of the Watts and Los Angeles violence, with the focus on the later. With a visceral montage of video the film excels at showing the brutal disregard for life on all sides. It feels like you are watching a live TV event.

LA 92 doesn’t try to tell the viewer if the violence was justified or who was right and who was wrong, but it does point at a system that refuses to acknowledge the concerns of Black people and their interactions with police. One of the conclusions the films suggests is that if significant changes are not made in most American police departments another violent episode is inevitable.

The parallels between the Watts violence to the Rodney King violence to the George Floyd violence is startling. Through a Christian lens we must ask ourselves: Do we choose to ignore this trend and remain silent or do we speak up? Do we believe and unify with our Black brothers and sisters or do we ignore their life experiences? Do we truly see people of color as made in the image of God or do we seem them as others?

KEY QUOTES: “For us to try to go back to tell Black people in the community that justice is blind, ‘Yeah, right.’ It is so blind that they can’t see us. It is so blind to whenever something happens to one of us, we get the max if we don’t get killed first.”

BONUS: Listen to a breakdown of the film on the What’s Up Doc podcast. What we appreciated about this podcast is the outsiders view of the events in 1992 – a view that we believe most white evangelicals would have of the event. Be warned that there is some very coarse language.

DID YOU KNOW?: We have more resources about policing in America.

On average police officers in academies across the United States spend 60 hours learning how to shoot a gun while spending just eight hours on mental health and communication – Ernie Stevens and Joe Smarro want to change that. Ernie and Joe: Crisis Cops provides an intimate look at the partners and best friends as they respond to mental health calls for the San Antonio Police Department’s Mental Health Unit, provide training to their fellow policemen, and navigate everyday life.